What is Apache Phoenix?

Apache phoenix is another Top Level project from Apache Software Foundation. It provides an SQL interface to HBase. It is like an SQL layer on top of HBase architecture. It maps HBase data model to the relational world.

Phoenix is developed in java with a notion to put SQL back into NoSQL databases.

Hive is added into Hadoop Eco-system to maintain and manage structured data in Hadoop and it also provide an SQL like dialect HiveQL to query the tables in Hive data warehouse. But hive doesn’t provide record level operations such as insert, update and delete operations.

To overcome this drawback of hive, HBase is brought into Hadoop eco-system to support record level operations. But HBase shell supports only HBase commands such as ‘scan’, ‘get’, ‘put’, ‘list’ to query entire table, to get a row, put a row and for listing tables etc. respectively. Thus HBase introduced its own set of commands and doesn’t support famous SQL interface.

Use of a well-understood language like SQL makes it easier for people to use HBase. Rather than learn another proprietary API, they can just use the language they’re used to to read and write their data.

To provide this advantage to HBase, Phoenix is introduced into Hadoop Eco System to provide an SQL Layer on top of HBase.

Why is Phoenix so Fast?

For aggregate queries, co processors complete partial aggregation on their local region servers and  only returns relevant data to the client.

Apache Phoenix installation on HBase is very simple and straight but we need to pick right version of Phoenix that matches with HBase version on our Hadoop cluster. Below is version compatibility matrix.

Now the installation is completed.

By default Cloudera Quickstart VM ships with a lot of hadoop eco system tools installed and configured in pseudo mode but Apache Phoenix is not yet officially supported tool by cloudera by the time of writing this post. So we need to install Apache Phoenix manually on Cloudera QuickStart VM.

But the successful combination is Cloudera-QuickStart-VM-5.3.0 (HBase-0.98.6) with Phoenix-4.3.0 but here we need to download the phoenix from cloudera labs.

To connect to phoenix, we need to specify the zookeeper quorum node and in pseudo mode it is localhost.

A terminal interface to execute SQL from the command line is now bundled with Phoenix. To start it, execute the following:

Verify the tables and columns with !tables & !columns commands. 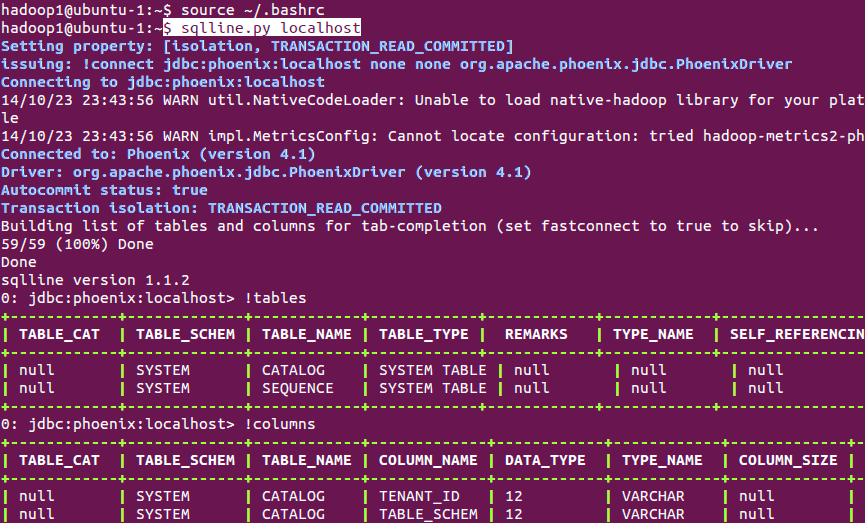 We can run some sample queries from .sql files present in $PHOENIX_HOME/../examples directory.

So, we have successfully configured phoenix and created sample table STOCK_SYMBOL and inserted rows into table and queried the values.

4 thoughts on “Apache Phoenix – An SQL Layer on HBase”