In this post, we will discuss about an example of Avro Serializing and Deserializing with avro data file creation (serializing data) and deserializing the same avro data file to read the contents back. This is continuation for our previous post on Avro Schema , in which we have defined schema for Employee record and compiled the schema with the help of avro-tools-1.7.4.jar file which generated the Java code for schema. In this post, we will discuss below topics.

Lets create some employee records in avro data file with the help of Employee_Record.java file created in example.avro package. Lets copy below lines of code into GenerateDataWithCode.java program in example package. In Eclipse, we will copy these programs into their packages example.avro and example respectively.

In the above code we are creating employee records in three ways (Calling setter methods, Constructor & via Builder class). And we are serializing these employee object records into avro data file with the help of SpecificDatumWriter & DataFileWriter classes of avro library. Below are a few details of these classes.

After compiling the above program by keeping it in correct package hierarchy, then we can run the program in eclipse itself. Now we can see the employees.avro file got created in the eclipse project folder. 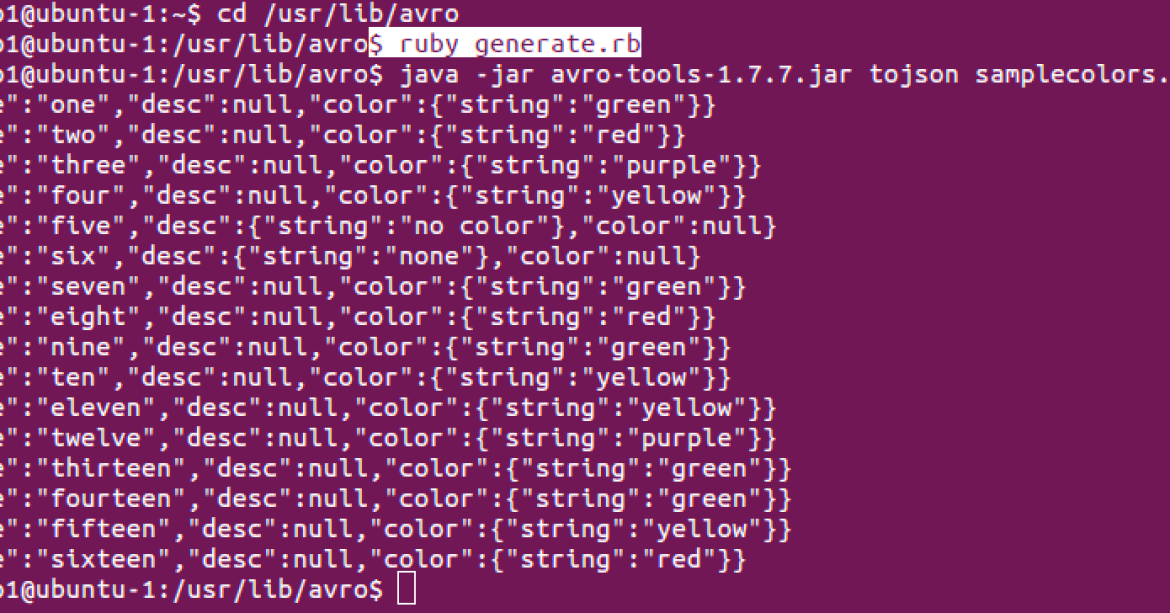 Below is the snapshot of project folder after running the above program in eclipse.

So, now the avro data file is successfully created.

Now lets, read the avro data file with help of below program which uses Employee_Record class to read the employee objects and prints the objects on console. Lets copy the below lines of code into DeserializeWithCode.java program.

In the above code, we are deserializing the employees.avro data file with help of below two classes from avro library.

Compile the above program and run it in eclipse. Below is the snapshot of console messages from eclipse after running the program.

As avro data files contain schema along with the actual data blocks, we can always read a serialized item regardless of whether we know the schema ahead of time or not. In this section we’ll create some employee records, serialize them to a data file on disk, and then read back the file and deserialize the employee objects.

As we are not using Employee_Record class to create the objects, so we will use Generic datum readers and Generic data File readers instead of specific data file/datum readers.

After compiling this program and running it from eclipse, below is the snapshot of project folder.

We can deserialize the above avro data file with the help of below java program.