Cassandra is designed in such a way that, there will not be any single point of failure. There is no master- slave architecture in cassandra. cassandra addresses the problem of SPOF by employing a peer-to-peer distributed system across homogeneous nodes where data is distributed among all nodes in the cluster. In cassandra all nodes are same. There will not be any master or slave in cassandra. Each node frequently exchanges state information about itself and other nodes across the cluster using peer-to-peer gossip communication protocol.

Cassandra is a partitioned row store database, where rows are organized into tables with a required primary key.Clients read or write requests can be sent to any node in the cluster. When a client connects to a node with a request, that node serves as the coordinator for that particular client operation. The coordinator acts as a proxy between the client application and the nodes that own the data being requested. The coordinator determines which nodes in the ring should get the request based on how the cluster is configured. 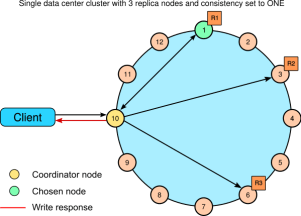 Following sections will explain you about how data will be distributed and the process of replication in cassandra cluster. 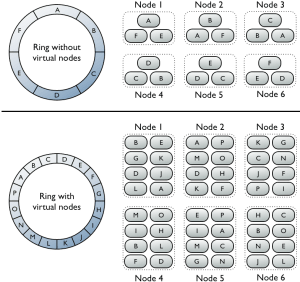