Cassandra is another no-sql database. Similar to Hbase it is also distributed column-oriented database to handle big data workloads across multiple nodes but it can support both Local File system and HDFS, whereas in Hbase the underlying file system is also HDFS.

It overcomes single point of failure by using a peer-to-peer distributed system across homogeneous nodes where data is distributed among all nodes in the cluster. Each node frequently exchanges state information about itself and other nodes across the cluster using peer-to-peer gossip communication protocol.

Commit log on each node will maintain write activity to ensure data durability. It will be sequentially written. Data is then indexed and written to an in-memory structure, called a memTable, which resembles a write-back cache. This is similar to memstore or WAL (Write Ahead Log) in Hbase.

Once memTable is full, the data is written to an SSTable (sorted string table) data file. All writes are automatically partitioned and replicated throughout the cluster. Cassandra periodically consolidates SSTables using a process called compaction (This is same as major compaction in Hbase to apply delete markers on HFiles), discarding obsolete data marked for deletion with a tombstone. To ensure all data across the cluster stays consistent, various repair mechanisms are employed.

Cassandra is a partitioned row store database, where rows are organized into tables with a required primary key. Cassandra’s architecture allows any authorized user to connect to any node in any data centre and access data using the CQL language. Unlike Hbase commands, CQL language uses a similar syntax to SQL and works with table data. Developers can access CQL through cqlsh, DevCenter, and via JDBC/ODBC drivers for application languages like java, python etc. Typically, a cluster has one keyspace per application composed of many different tables.

Clients read or write requests can be sent to any node in the cluster. When a client connects to a node with a request, that node serves as the coordinator for that particular client operation. The coordinator acts as a proxy between the client application and the nodes that own the data being requested. The coordinator determines which nodes in the ring should get the request based on how the cluster is configured.

Note: In multiple data-center clusters, the seed list should include at least one node from each data center (replication group). More than a single seed node per data center is recommended for fault tolerance. Otherwise, gossip has to communicate with another data center when bootstrapping a node. Making every node a seed node is not recommended because of increased maintenance and reduced gossip performance. Gossip optimization is not critical, but it is recommended to use a small seed list (approximately three nodes per data center).

How data is distributed and factors influencing replication.

In Cassandra, Data is organized by table and identified by a primary key, which determines which node the data is stored on. Replicas are copies of rows. 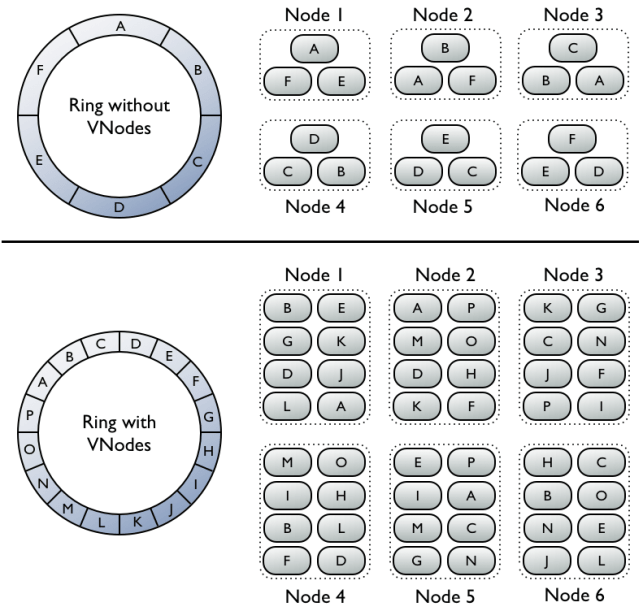 In the first half, each node is assigned a single token that represents a location in the ring. Each node stores data determined by mapping the partition key to a token value within a range from the previous node to its assigned value. Each node also contains copies of each row from other nodes in the cluster. For example, if the replication factor is 3, range E replicates to nodes 5, 6, and 1. Notice that a node owns exactly one contiguous partition range in the ring space.
The bottom half of diagram displays a ring with vnodes. Within a cluster, virtual nodes are randomly selected and non-contiguous. The placement of a row is determined by the hash of the partition key within many smaller partition ranges belonging to each node.

Determines the total number of replicas across the cluster.

We need to define the replication factor for each data center. Two replication strategies are available:

Replication strategy is defined per keyspace, and is set during keyspace creation.

Partitions the data across the cluster.

A snitch defines groups of machines into data centres and racks (the topology). We must configure a snitch when we create a cluster. All snitches use a dynamic snitch layer, which monitors performance and chooses the best replica for reading. It is enabled by default. Configure dynamic snitch thresholds for each node in the cassandra.yaml configuration file.

The default SimpleSnitch does not recognize data center or rack information. Use it for single-data center deployments or single-zone in public clouds. The GossipingPropertyFileSnitch is recommended for production. It defines a node’s data center and rack and uses gossip for propagating this information to other nodes.