In this post, we will discuss about all Hive Data Types With Examples for each data type. Hive supports most of the primitive data types supported by many relational databases and even if anything are missing, they are being added/introduced to hive in each release.

Hive Data types are used for specifying the column/field type in Hive tables. Hive data types can be classified into two categories.

Primary Data Types are further classified into four categories. They are:

DECIMAL(5,2) represents total of 5 digits, out of which 2 are decimal digits. Below is the chart for all numeric types with their ranges and examples. 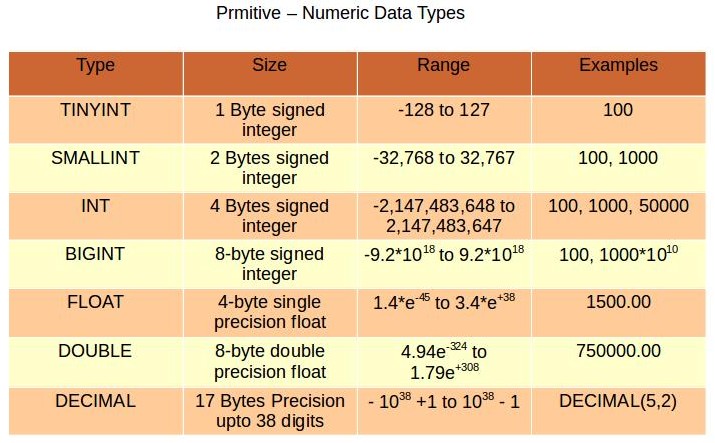 In Hive, by default integral values are treated as INT unless they cross the range of INT values as shown in above table. But if we need to use a low integral value like 100 to be treated as TINYINT or SMALLINT or BIGINT then we need to suffix the value with Y, S or L respectively.

Three types of string data types are supported in Hive as of 0.14 release. They are listed in below chart.

We can also cast the String, Time-stamp values to Date format if they match format but declared as String or Time-stamp data type.

BINARY is an array of Bytes and similar to VARBINARY in many RDBMSs. BINARY columns are stored within the record, not separately like BLOBs . We can include arbitrary bytes in BINARY column and these bytes are not parsed by Hive as numbers or strings.

In the above hierarchy, Implicit conversion is allowed for types from child to an ancestor. So, TINYINT can be converted to any other numeric data type but BIGINT can only be converted to FLOAT or DOUBLE but the reverse

Boolean & Binary data types will not be  converted to any other data type implicitly.

Explicit type conversion can be done using the cast operator only.

Example: CAST(‘500’ AS INT) will convert the string ‘500’ to the integer value 500.  But If cast is used incorrectly as in CAST(‘Hello’ AS INT) , then cast operation will fail and returns NULL .

Complex Types can be built up from primitive types and other composite types. Data type of the fields in the collection are specified using an angled bracket notation. Currently Hive supports four complex data types. They are:

Example – For a column c of type STRUCT {a INT; b INT} the a field is accessed by the expression c.a

For example if we declare a column as Union Type as shown in below.

Then retrieving results for col1 from test table can be any of the below possibilities.

Default delimiters table for the fields in collection data types.

Below is the sample User table creation to cover most of the data types discussed in this post.