In Multi Agent or Multi-hop setup events travel through multiple agents before reaching the final destination. In Multi agent flows, the sink of the previous agent (ex: Machine1) and source of the current hop (ex: Machine2) need to be avro type with the sink pointing to the hostname or IP address and port of the source machine. So, thus Avro RPC mechanism acts as the bridge between agents in multi hop flow.

Below are configuration properties that needs to be setup for Agent1 on Machine1 under FLUME_CONF_DIR/flume.conf properties file.

In the above setup, we are sending events in files from /home/user/testflume/spooldir  location to port 11111 (we can use any available port) on remote machine (Machine2) with IP address 251.16.12.112 (For security reasons, we have used sample IP address here) through file channel. Now do not start the Agent1 until we setup Agent2 and start it first.

So now, events are received from Machine1 spool directory into Machine2 on port 11111. Now we need to collect these events from Machine2 and put them on HDFS available on Machine2. Here are also we are using file channel to make sure no events are lost during transmission even if Agent2 fails in the middle.

Below are the configuration properties for Agent2 on Machine2 which needs to be kept under FLUME_CONF_DIR/flume.conf file.

Before Starting agents on two machines,

Now start Agent2 on Machine2 first and then Agent1 on Machine1. Below are the commands that can be used to start the agents.

Below are the screen shots of starting agents Agent2 and Agent1 on two machines.

Below is the screen shot of Input spool directory.

After successful start of agents, we input files will be converted into .COMPLETED files in the input spool directory and files are stored in HDFS directory as shown in below screen shot. 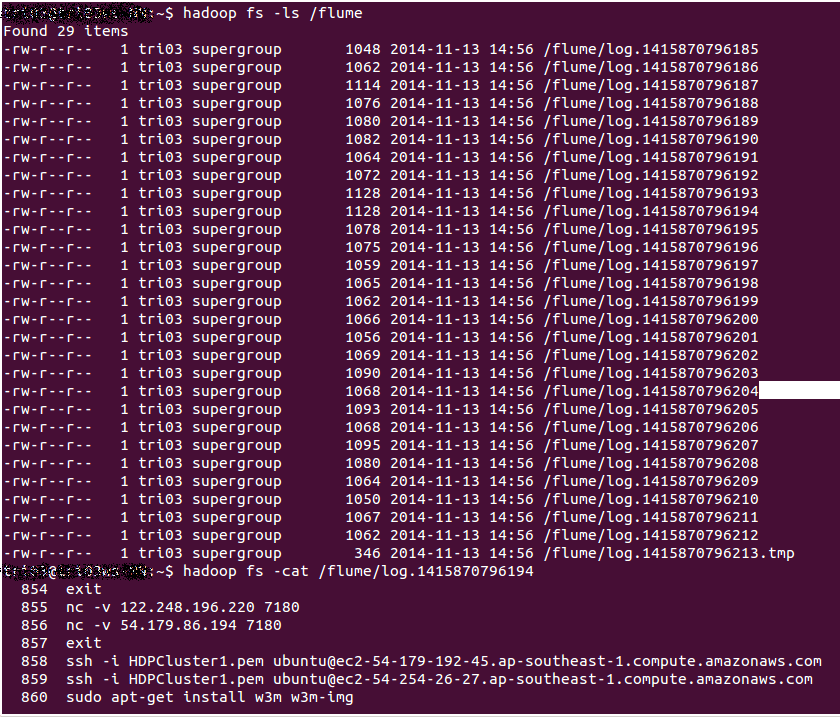 For setup of multiple agents with an example, we have showed the above agents to transfer events from a spool directory source on one machine into HDFS sink on another machine. If it is just for transferring the events from one machine onto another machine of HDFS sink is our aim, then we can achieve this just by setting up a single agent on source machine with below configuration properties. (Considered agent as Agent3).

This is the advantage of HDFS sink.

So we have successfully setup multi agent hop with AVRO RPC as bridging mechanism and sent data events across machines.