What is an RDD?

A Resilient Distributed Datasets (RDD) is a fundamental data structure of Spark. It is an immutable distributed collection of objects. Each dataset in RDD is divided into logical partitions, which may be computed on different nodes of the cluster. RDDs can contain any type of Python, Java, or Scala objects, including user-defined classes.

Why RDD in Spark?

MapReduce is widely adopted for processing and generating large data sets with a parallel, distributed algorithm on a cluster. It allows users to write parallel computations, using a set of high-level operators, without having to worry about work distribution and fault tolerance. I.e Slow due to replication, serialization, and disk IO. So there was need for alternative programming model called RDD. Below we can see the    computational performance of MapReduce and Spark programming model. 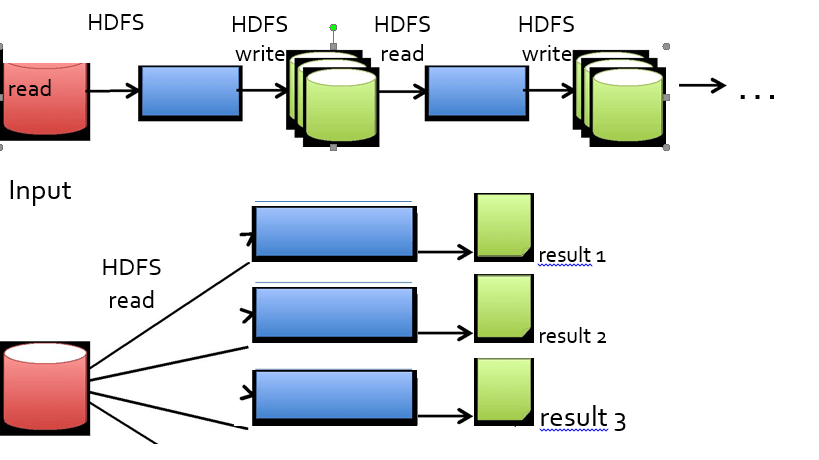 Which results 10-100 × faster performance than network and disk.

Formally, an RDD is a read-only, partitioned collection of records. RDDs can only be created through deterministic operations on either (1) data in stable storage or (2) other RDDs. We call these operations transformations to differentiate them from other operations on RDDs. Ex- amples of transformations include map, filter, and join. RDDs do not need to be materialized at all times. In- stead, an RDD has enough information about how it was derived from other datasets (its lineage) to compute its partitions from data in stable storage. This is a powerful property: in essence, a program cannot reference an RDD that it cannot reconstruct after a failure.

Finally, users can control two other aspects of RDDs: persistence and partitioning. Users can indicate which RDDs they will reuse and choose a storage strategy for them (e.g., in-memory storage). They can also ask that an RDD’s elements be partitioned across machines based on a key in each record. This is useful for placement optimizations, such as ensuring that two datasets that will be joined together are hash-partitioned in the same way.

How to program with RDD:

An RDD is simply a distributed collection of elements. In Spark all work is expressed as either creating new RDDs, transforming existing RDDs, or calling operations on RDDs to compute a result. Under the hood, Spark automatically distributes the data contained in RDDs across your cluster and parallelizes the operations you perform on them.

Users can create RDDs in two ways: by loading an external dataset, or by distributing a collection of objects (e.g., a list or set) in their driver program. Let’s see loading a text file as an RDD of strings using SparkContext.textFile().

Example :1 Creating an RDD of Strings with text file () in Python:

Once created, RDDs offer two types of operations: transformations and actions. Transformations construct a new RDD from a previous one. For example, one common transformation is filtering data that matches a predicate. In our text file example, we can use this to create a new RDD holding just the strings that contain the word Python, as shown in example 2 below.

Actions, on the other hand, compute a result based on an RDD, and either return it to the driver program or save it to an external storage system (e.g., HDFS). One example of an action we called earlier is first(), which returns the first element in an RDD and is demonstrated in example 3 below.

Transformations and actions are different because of the way Spark computes RDDs. Although you can define new RDDs any time, Spark computes them only in a lazy fashion—that is, the first time they are used in an action. This approach might seem unusual at first, but makes a lot of sense when you are working with Big Data

Finally, Spark’s RDDs are by default recomputed each time you run an action on them. If you would like to reuse an RDD in multiple actions, you can ask Spark to persist it using RDD.persist(). After computing it the first time, Spark will store the RDD contents in memory (partitioned across the machines in your cluster), and reuse them in future actions. Persisting RDDs on disk instead of memory is also possible. The behaviour of not persisting by default may again seem unusual, but it makes a lot of sense for big datasets: if you will not reuse the RDD, there’s no reason to waste storage space when Spark could instead stream through the data once and just compute the result.

Example 4: Persisting an RDD in memory

To summarize, every Spark program and shell session will work as follows:

As we read earlier, transformations on RDDs are lazily evaluated, meaning that Spark will not begin to execute until it sees an action. Lazy evaluation means that when we call a transformation on an RDD (for instance, calling map()), the operation is not immediately performed. Instead, Spark internally records metadata to indicate that this operation has been requested. Rather than thinking of an RDD as containing specific data, it is best to think of each RDD as consisting of instructions on how to compute the data that we build up through transformations. Loading data into an RDD is lazily evaluated in the same way transformations are. So, when we call sc.textFile(), the data is not loaded until it is necessary. As with transformations, the operation (in this case, reading the data) can occur multiple times.